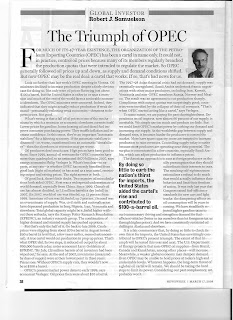 The Organization of the Petroleum Exporting Countries (OPEC) is a cartel (oligopoly). An agreement among existing suppliers to keep out competitors can be a formidable barrier.
The United States is either in or near a recession while much of the rest of the world faces a noticeable economic slowdown. This drop in income has caused demand for oil to drop (leftward shift of DD curve). Price and quantity will be lowered. OPEC will lower production (leftward shift of SS curve) even further to raise the price back to what it was initially. The drop in supply could also be due to civil unrest in oil-producing countries like Iraq, Nigeria, Iran & Venezuela. However, rapid economic development in China and India drives up global demand for world. Increase in demand for oil, coupled with a drop in supply of oil has caused price of a barrel of oil to escalate to $130++
There is price inelastic demand for oil as annual oil revenue of OPEC countries have more than quadrupled when at high prices.
Saudi Arabia possesses the largest market share in the oil industry, hence it was able to influence other major oil producers to lower the output quota of oil together.
Posted by: Steffi


We are 08S7A and this is our economics blog.